OOP is a method for organizing programs. It includes

Each object can have its own local state (meaning its own variables), and also knows how to manage its own state.

OOP is particularly useful when you have many similar things that can be further generalized to avoid repeating redundant code. For example, you could have an Animal object, with other sub-classes of the Animal (for example, Turtle, Cat, Bear, etc.) - this (inheritance) will be covered in the next page.

I want each of my animals to have instance variables for food and happiness as well as methods (equivalent to functions) to have animals play with each other.

In Python, whenever we want to create an instance of a class, we just assign a variable to a call to the class:

The example below won’t necessarily make sense for now, but I’ll break it down later into smaller parts that will each be explained.

In this case, Animal(<args>) is called the constructor.

When our constructor (my_cat = Animal("Sochi")) is called, it does the following:

Dot notation here (for example with self.name) allows you to access all attributes of an object (including both instance variables and instance methods). The left-hand side does not need to be self - it can be anything that evaluates to an object instance (more on this later).

In this case, self refers to the instance being passed in - not every animal is the same, so self shouldn’t refer to the same animal. This might be more clear with the next example.

First, let me draw a representation of the Animal class that we’re referring to in the code block above. This is not the official Python Tutor environment diagram for a representation of classes, but this notation is a very clear way to see the lookup order of certain variables. 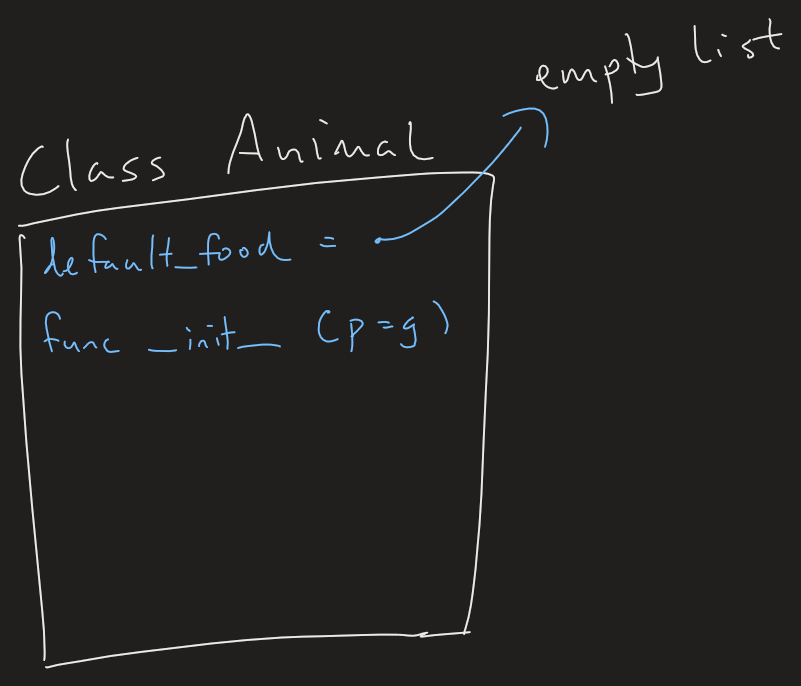 I haven’t put every single method in the class

Afterwards, when we call my_cat = Animal("Sochi"), we create a new instance of the class. I will denote a new instance with a circle rather than a rectangle, label the newly created instance with my_cat (the name of the variable assigned to it), then an arrow will be drawn to the class that this instance refers to. This will be even more important when we look at inheritance in objects.

Now, we can see that our variable my_cat has instance variables name, food, energy, times_fed, which can be mutated by either mutating my_cat or using methods, which we will show later.

You might be wondering where self.food comes from. In this case, self.default_food[:] will look for default_food in its own instance, which it can’t find because nothing is defined, so it will then look at the ‘frame’ above, or in this case, the class itself for default_food, which it does contain. As a result, that value is used for self.food. You can think of this as variable lookup with different frames.

To mutate our instance, we can use my_cat to do so.

Running the following line of code will look for whatever my_cat is pointing to, which in this case, is the instance, then find energy and update that.

This does the same thing as calling Animal.feed(my_cat, "Tuna") if you want to see where the self variable comes from

In this case, my_cat gets implicitly passed in as self, so the first argument in my_cat.feed("Tuna") (Tuna) will get passed in to feed as food.

As a result, we will update our instance variables following the instructions in the function, where self refers to the instance we made in the image above.

Notice how we have only updated the instance variables but not the class variables related to the (located in the rectangle). The new methods in the Animal class were already defined before, I added them in the image above for clarity reasons - (it shows where the function comes from)